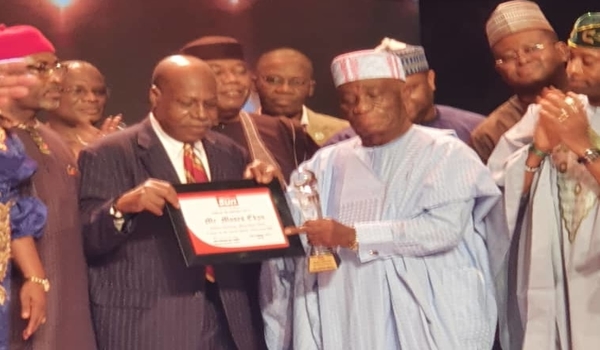 Akwa Ibom state deputy governor, Mr. Moses Ekpo, has in retrospect not only dedicated his Lifetime Achievement Award by SUN Newspapers to his boss, Governor Udom Emmanuel but as well recognised some of his ranking professional colleagues who mentored him in the trade.

Ekpo being the winner of the company’s 2020 Lifetime Achievement Award, said the award meant so much to him especially coming from the domain of his profession.

He said in view of the significance of the Award, he reasoned to make multiple dedications with Governor Udom Emmanuel taking the prime of place.

He said he was also dedicating the Award to his late wife, Martha, as well as mentors under whose tutelage he rose to prominence. He reeled out names like the late governors of Lagos and Ogun, Chiefs Lateef Jakande and Bisi Onabanjo; MCK Ajuluchukwu among other veterans whom he crossed the path in his journey in the journalism profession.

Appreciating the organization for recognizing one of its own, the Secretary to the Akwa Ibom state government, Dr. Emmanuel Ekuwem, who led the state delegation to the Award ceremony in Lagos, commended The SUN Publications, organisers of the event.

“The 18th edition of The SUN Awards had lived up to the billings as a highly credible initiative that has proven to be a unifying platform for nation-building.

“The Sun’s Lifetime Achievement Award is given to a nominee who is above 70 years and made tremendous impact over the years in the socio-economic and political development of the country”, he said.

The event held at the Expo Convention Centre of the prestigious Eko Hotels and Suites, Victoria Island in Lagos, was attended by the creme de la creme of the nation, including a cross-section of the Akwa Ibom State Executive Council, friends, and associates of Mr. Ekpo.

Meanwhile, prominent sons and daughters of the state have continued to felicitate with the deputy governor for earning the Award. These include among others, the Akwa Ibom State government, the Committee of friends, the college of Commissioners, members of the National Assembly, the State Chapter of the Peoples Democratic Party, PDP, and the Office of the Deputy Governor of Akwa Ibom State.

A congratulatory message from the Government of Akwa Ibom State signed by the Secretary to the State Government, SSG, Dr. Emmanuel Ekuwem, said “the many wise counsels and excellent contributions you have made to the growth and development of Akwa Ibom in particular and Nigeria in general, have distinguished you as a rare gem.

“The government further stated, “as a thoroughbred professional, social mobilizer, community leader and politician of impeccable loyalty, you have remained an icon of hope for our generation adding that the Award was an eloquent exemplification of the State’s Dakkada philosophy.

In her message, Senator Akon Eyakenyi of Akwa Ibom South Senatorial District described Mr. Ekpo as “a quintessence of national service and a die-hard believer in the workability of Project Nigeria”.

“You have given your entire active and conscious adult life to the service of our country and served dutifully but diligently as a top rate media professional, You even at some point paid a heavy price in the course of your patriotic service to the Nigerian State.”

She went on to describe the Deputy Governor as “a worthy example of devotion and dedication to the service of one’s fatherland and we are proud you come from Akwa Ibom State”.

The State Chairman of the Peoples Democratic Party, PDP, Mr Aniekan Akpan, described the Award as “a culmination of an overdue acknowledgment of your immense contribution to the development of our dear State in particular and nation-building in general”.

The former Speaker of the Akwa Ibom State House of Assembly and member, House of Representatives, Mr. Onofiok Luke, said the conferment of the Award was “an affirmation of your status as the doyen of public service”, adding that “in you, Akwa Ibom people have found a ceaseless source of knowledge, inspiration and experience”.

“From your days of little beginnings as a firebrand journalist with the Daily Service, the West African Pilot and Western Nigeria Broadcasting Service, to becoming the pioneer Editor of the then Nigerian Chronicle, the story of your progress and achievements would easily pass for a bestseller”, he added.

Another member of the House of Representatives, Mr Aniekan Umanah, in his message of goodwill said “your recognition by the Sun Newspapers is not surprising to us as a people because you have been a shining light whose professional and leadership prowess in Journalism, Public, Diplomatic, Community service and Governance have distinguished you as a committed Nigerian of unrivaled character and unparalleled achievements.

He further described Mr. Ekpo as “an epitome of public service, a great stabilizer in the purposeful administration of Governor Udom Emmanuel in Akwa Ibom State”, adding that the Sun Award was an honour well-deserved.

In the letter of nomination to the Deputy Governor signed by the Managing Director, Mr. Onuoha Ukeh, the Sun traced the career trajectory of Mr. Ekpo and described him as “a role model for the youths of a contemporary generation”. It went on to note: “You started as a journalist, rose through the ranks to the pinnacle of journalism, went into public service where you distinguished yourself, showing dynamism, industry and serving without blemish”.

The Permanent Secretary in his office, Mr. Nkopuruk Ekaiko in a message on behalf of the management and staff noted that “as close watchers of your unique leadership, we have come to the full appreciation that no single life dedicated to service will ever go unrewarded; and the odyssey of your life of impact speaks volumes in this respect.”

“From humble beginnings through an exciting journalism career, traversing both the diplomatic and political firmaments with great panache, you have clearly distinguished yourself as one with exemplary public service credentials”.

The Sun’s Lifetime Achievement Award is given to a nominee who is above 70 years and “has made a tremendous impact over the years in the socio-economic and political development of the country. 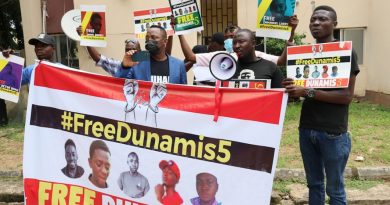 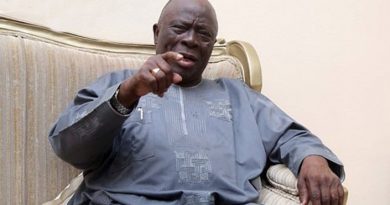