The Odung Okung people in Eyo Abasi community of Oron Local government area of  Akwa Ibom state who were displaced by communal feud ten years ago, have called on the Federal, State and the United Nations to quicken the process of return to their ancestral home. The appeal was made by the people while also calling for the release of government’s white paper on the crisis.

It was gathered that the people of Odung Okung were a victim of circumstance in the crisis which erupted between their neighbours Udong Ulo/Udong Usotai of Eyo Abasi community  on one side and Afaha Eduok/Ukpata of Idua community on the other side, all in Oron LGA.

Speaking on Saturday with Lens reporter, the clan head of Okpo/village head of Odung Okung, Francis Eyo, lamented that his people have been subjected to  the most dehumanising condition ever since they were displaced ten years ago.

He then called on President Buhari, the state governor, Udom Emmanuel and relevant agencies including the UN to expedite their return their ancestral home land.

Said he, “We were displaced on the 21st of December, 2010 and we got scattered and we found ourselves here. This place you find our people was originally meant for market but because of the crisis  which we are involved in, we are here. The environment is not conducive. Right now we have six corpses lying down there, why are they not buried because the environment is not  conducive. The health centre we have is just like a store.”

He also informed Lens that, “A commission of Inquiry was set up by the then government but since then nothing has been done about it”. “We want government to release the white paper on the crisis” he emphasized.

Sources said though the crisis initially started as a land dispute, the prolonged crisis was ignited following the laying of gas pipelines by the Federal Ministry of Power and Steel which had resulted in payment of compensation to the affected villages.

The youths of Afaha Eduok and Ukpata, in alleged transferred aggression, had invaded the Odung Okung village also of Eyo Abasi community and displaced them to where they now settle in small shanties hemmed in by the ocean.

Also speaking, a youth representatives Mr. Emmanuel Abang, described their experience as painful adding that the most worrisome aspect of it is that those involved in the crisis have long returned home.

He lamented that the only access road to their ancestral home has been blocked by the Maritime Academy, Oron, thereby engulfing them.

“The most painful aspect of this is that these communities that were in the crisis are staying in their villages” Abang lamented.

A community leader, Eteyon Oboho, captured the scenario in this manner, “Ever since we were displaced we have being living here. You can see how the environment is. We have been crying to relevant authorities, the state government set up a commission of Inquiry and we have written series of letters.”

And continuing, he said, “The one that really cracked us down is the closure of the access road by the Maritime Academy of Nigeria, Oron. We have been using the access road from time immemorial.The closure has entangled us completely from our economic livelihood without alternative route. From here to our ancestral home is just a distance of about 400 meters.”

He then called on the State government to open up alternative access road as the village has no money on its own to do so. 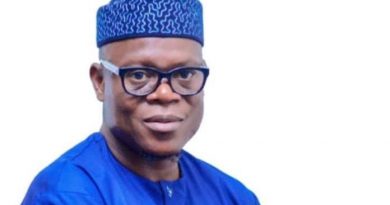