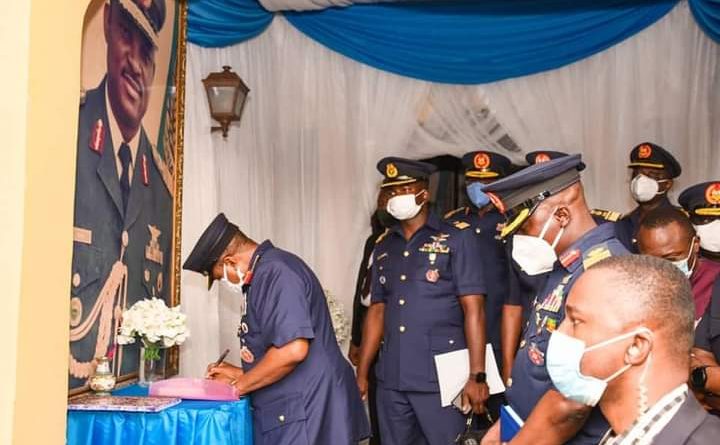 The Chief of Air Staff, Oladayo Amao has described late Air Marshal Nsikak Eduok, as a man of valour, integrity and a great achiever with unprecedented strive for success.

He paid this tribute at the burial of his former colleague yesterday at Ibom Hall ground, Uyo, Akwa Ibom state in an obsequie conducted by United Evangelical Church, founded as Qua Iboe Church.

According to him, late Eduok was one of the best hands the force had, one who changed the landscape of the service and was mentor to many retired and serving officers.

“He was one of the best that changed the landscape of the service and was a mentor to so many of us, both serving and retired.

“As the 12th Chief of Air Staff, he contributed significantly to the development of the Nigerian Air Force and impacted on the Air Force.

“He was my personal mentor. His astuteness, and his dedication during his sojourn on earth made significant and considerable impact on our lives and Nigerian Air Force as a whole. While serving as Chief of Air Staff, late Air Marshal Nsikak Eduok brought operational and administrative experiences to bear in steering the affairs of the Nigerian Air Force.

“He was renowned as the first COAS to procure a Helicopter which enhanced the capability and operational efficiency of NAF.

Even in retirement, late former Chief of Air Staff continued to make invaluable contribution to the development of the service with significant input in the restructuring of the NAF to make it more effective in dealing with the contemporary security challenges facing the country.

“His contributions to the Nigerian Air Force in pursuit of national security and security will forever be remembered. The shocking news of the Late Air Marshall Nsikak Eduok’s death which occurred on January 6, 2021 is a reminder to each of us on the inevitability of death. Air Marshal Eduok will surely be missed for his professional contribution not just the Air Force and Akwa Ibom State alone, but to the entire nation.

“In honour of his sacrifice to the service and the nation and recognition of his extraordinary crave for fitness the Ultrafit Gymnasium center at the Nigerian Air Force Base Yola was commissioned and named after Air Marshall Nsikak Eduok to immortalize him.

He assured the state of NAF’s continuous support in this trying time, recalling that, two weeks ago Late Air Commodore Idongesit Nkanga was interred in the state, noting, “These are huge loses to the NAF, Akwa Ibom and the country”.

In his condolence message to the family of the late Air Force Officer, The former military President. General Ibrahim Babangida, described late Eduok as an officer who had distinguished himself while serving the country, adding that, Akwa Ibom state and Nigerian has lost a rare gem.

“It beat me hollow to write a tribute on one of my young officers who played his part so well and distinguished himself in a profession encumbered by so many challenges in Nigeria. Late Air Marshall Nsikak Eduok was not just a fine officer with sterling qualities, he was a patriot with enormous loyalty to his fatherland”.

In his tribute, the former President, Chief Olusegun Obasanjo, described late Eduok as one who played significant role during the Nigerian civil war, noting that he worked tirelessly to build an efficient and effective Air Force.

“The late Air Marshall Eduok has a distinguished career in the Nigerian Airforce which he joined in 1968 and served as fighter pilot. He played a significant role in helping to keep our dear country together during the Nigerian crisis of 1968-1970. As Chief of Air Staff, he worked tirelessly to build up an efficient and effective Airforce with capacity for local training of its personnel”.

Earlier, Akwa Ibom state governor, Mr. Udom Emmanuel noted that the country, the Nigeria Airforce, the Church and the people of Akwa Ibom state have lost a rare gem, stressing that he was filled with a big sense of loss and grief.

“This is not an exciting day for me because this state within a very short time, has lost so many personalities. Today, I feel the pains of recent occurrences, today I look at the picture I took long ago that Major General Akpan sat, Air Commodore Nkanga sat and Air Marshall Eduok sat, three of them in a row, I just look at and something just struck me on the emptiness of life and I wondered when people just go about as if they are gods on earth, without optimizing the emptiness of life.

“Nigeria have lost a gem, air force has lost a colossus, Akwa Ibom state has lost a statesman. I want to believe the church has lost a fighter, Ibibio nation has lost a great son, the family you have lost a husband, a father and grandfather.

“I stand here today filled with a big sense of loss and grief, on behalf of the government and good people of AKS to bid farewell to a brave Nigerian, patriot, trail blazer an epitome of courage and bravery, a decorated air force officer and above all, a husband, a father and a devout Christian.

“The late officer, Nsikak Eduok was one of our ambassadors, who epitomizes the Akwa Ibom virtues of duty, honesty, transparency, integrity, honesty, love for the country and brought these ideals to bear in the cause of his illustrious career in the Nigerian Airforce where he rose to the pinnacle of that noble service as the 12th Chief of Air staff, the first Akwa Ibomite to ever occupy that exulted position.

“Before us was a man who define the full essence of the word loyalty. Not many people would have possessed such level of stoic resignation, as he did when he was first announced chief of air staff only to have it reversed days later, yet he did not display any sense of bitterness.

“He was a man of deep faith and an elder in the United Evangelical church, he believed in the powers of prayers, as deep believer, he knew intuitively that who God chooses, He qualified and when the right time comes, God elevate him to the position of Chief of Air Staff. It is on record that during his tenure, he brought about enduring innovations to the air force.

“In retirement, he chose to return to his home state and he was a very dependable statesman, he did not fail at any point in time to call me or send a message to me that we should meet and resolve issues, he used to speak to me very often”.