This preliminary effort of INEC is a crucial step towards eliminating rigging and other electoral fraud as we edge hear the general elections in 2019.

The Lens recall as well the performance of INEC in the Osun governorship election last month. And while in the resumed election, 7 polling units, here in referred to as Oshun 2 was marred with divers irregularities, the first leg of the election we refer to as Osun I was highly commended as free and fair by a reasonable number of Nigerians as well as local and international observers.

The electoral umpire received knocks for declaring the election inconclusive. Those pushing this line of argument premised their position on the supreme court judgement in the governorship race between Adams Oshimhole and Osunbo in the 2007 Edo election which decided that cancelled votes were cancelled votes and must not have any bearing in the overall result of a governorship election. Another referral was the case of Willie Obiano and Tony Nwoye of APGA and PDP respectively in 2013 where differential of excess votes cancelled did not stop INEC from declaring Obiano winner.

Another case of INEC inconsistency in this regard was the federal constituency bye-election in Lokoja in August where cancelled votes were much more than the difference between the APC candidate that won the election and the PDP candidate, yet INEC declared the former winner.

The second leg which involved a rerun in seven polling units covering four local councils on Thursday last week produced Alhaji Gboyega Oyetola, the governorship candidate of the All Progressive Congress as winner.

Our position in The Lens is that multiple wrongs cannot make a right, meaning if INEC went outside its rules that binds it, such infraction cannot become law over time. The goofing of INEC in previous elections should not become a standard for elections in Nigeria. We in The Lens are of the opinion that rather than castigating the electoral umpire, they should be commended because for the first time, Nigerians witnessed election that was conducted in accordance with the spirit and letter of the law. In the Osun case, INEC did what is expected of it on an election day. First, the results were announced within 14 hours of the election. There was no buying of votes as was the case in Ekiti because INEC put in place necessary measures to scuttle it. And aside pockets of minor infractions, there was no real violence.

Our reckoning in The Lens is that by the Osun exercise throwing up this level of compliance to laid down electoral procedures, notwithstanding the flaws which are tolerable, in an election close to electioneering year, it is a workable template signaling that the 2019 general elections is on the right path.

INVASION OF THE NATIONAL ASSEMBLY, RAPE ON DEMOCRACY 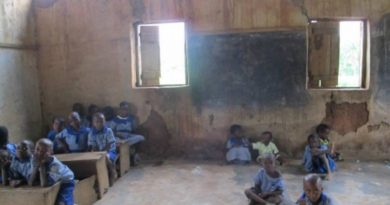 1500 SCHOOL PUPILS IN DANGER AT ODUKPANI