The supreme court sitting in Abuja had in February, 2017 ruled in a suit brought before it by the Cross River State government against the Independent National Electoral Commission, that the three wards in Akpabuyo Local Government area be ceded to Bakassi. The judge in the ruling had appealed to INEC to do the needful as the people of Bakassi have suffered Political deprivation for too long.

But months down the line after the ruling, the status quo still subsist as the wards of Ikang North, Ikang Central and Ikang South are still un delineated. The people have expressed deep concerns, wondering why INEC is still foot dragging on the delineation.

Hon. Dr. Ekpo Ekpo Bassey, a member of the Cross River State House of Assembly, representing Bakassi constituency and chairman house committee on health, in a chart with The Lens last week expressed disapproval of INEC’s continuous delay in doing the needful after the court judgement. Said he “clearly, the recent issue concerning the supreme court judgement that was delivered on the 23rd of February, 2018 for INEC to respect the provisions of law number 7, enacted by Cross River State House of Assembly and do the needful by activating its powers to delineate constituencies and wards”.

In a telephone conversation with The Lens last week, while responding to the question of whether INEC is prepared to delineate the three wards, Mr. Ndueso Amamkpa, the Electoral Officer in Charge of Bakassi said “it is not within the powers of INEC in Cross River State to delineate but INEC Headquarters in Abuja”.  The later, he said could not embark on the exercise now because of the magnitude of work involved as well as the closeness to election. He explained that the exercise will not only involve Bakassi but Akpabuyo as well which have to be upgraded to ten wards, while seven more wards are to be added to Bakassi to make it ten wards. This in his words is the minimum standard of INEC for local Government Areas. Aside delineation, he said the PVCs has to be configured to reflect wards, Local Government Areas, and units which takes time and expertise.

Meanwhile, a political stakeholder in Bakassi Miss Frank Edima, has expressed frustration at the unenthusiastic position of political leaders especially from the area on the political situation in Bakassi Local Government Area even as the 2019 political elections draws closer.

Speaking exclusively to The Lens in Calabar last week, the Founder of Care Mentors: – (a Socio political group) said the political leaders in Bakassi are not united in the agitations and this does not help with the struggle.  According to her, “I’m sure if the political leaders are together, devoid of division, defection, and speak with one voice and go to INEC and pressurize them, INEC would have long delineated the wards in the local Government Area.

The Youth leader, said that she is currently organizing a continuous sensitization and voter’s education programme for the youths and people of Bakassi on the need to get registered and to get the PVC, but regretted that Bakassi has only one polling unit which is at the IDP town of Ikot Effiom and is a challenge for the people transportation wise.

She said that she was upbeat as the sensitization and mobilization of the people to be registered is yielding results as more people are now eager to participate in the exercise. “In fact, the Electoral officer for Bakassi according to her “called me recently to express his satisfaction with the level of response and promised to provide more laptops for the exercise”. 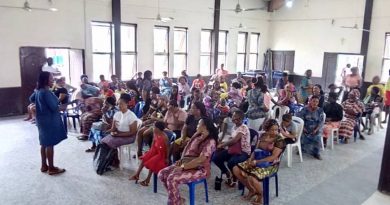