The above statement of Theresa May, the British Prime Minister on Nigeria is not shocking as she is only stating the obvious. This kind of thinking which is not exactly couched in her language has been expressed earlier by Brookings Institute which named Nigeria as the poverty capital of the world, overtaking as it were India, a country with a total population of over 1.3 billion people.

May said “much of Nigeria is thriving, with many individuals enjoying the fruits of a resurgent economy, yet 87 million Nigerians live below 1,90 cents a day, making it home to more very poor people than any other nation in the world”. The equivalent in naira is about ₦700.00.

For us in The Lens, the best way to proceed is not for government to push back in a bid to invalidate this assertion because the indices are very glaring for everyone to see. Indeed, the economy is impacting very negatively on Nigerians, save those in the establishment and their cronies whom May said “….Much of Nigeria is thriving with many individuals enjoying the fruits of a resurgent economy”.

This real time predication is so because Nigeria’s economy is still underdeveloped given available statistics in virtually all sectors of the economy. The few existing small scale businesses-SMSE, are tipping because what should have kept them thriving is to be modest abysmal. There are no functional utilities like electricity, water, credit facilities or support from the government that would have facilitated business. This is in contrast with a country like Germany where about 95% of businesses are small to medium scale types and is the engine room of the country’s economy.

Earlier, May had promised in Cape Town, South Africa during her trade mission for Africa to invest £4bn in support for African economies, to create jobs for young people.

She made good her promise last Wednesday when she visited Nigeria. The British Minister of State for Africa, Harriet Baldwin while delivering the largesse said “Today, it is all about celebrating those links through technology and I am very excited that the Prime Minister is announcing a new £70 million programme that will create some 100,000 jobs in Nigeria and will also raise the income of three million people from the poorest parts of Nigeria”.

And looking at the issue of our poverty numbers, states are swelling the number as majority owe salaries, pensions and contractors in billions, yet the FG is still approving loans-local and foreign, which aside mismanagement, use it for recurrent expenditures. Whereas borrowing should be for investment, not consumption in order to be able to pay back. This practice of confederating states compounds the poverty indices of Nigeria. 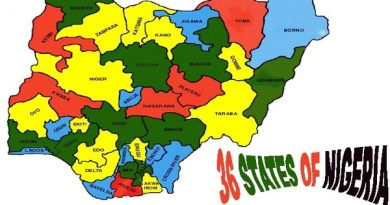 Menace of Juvenile Miscreants in Calabar